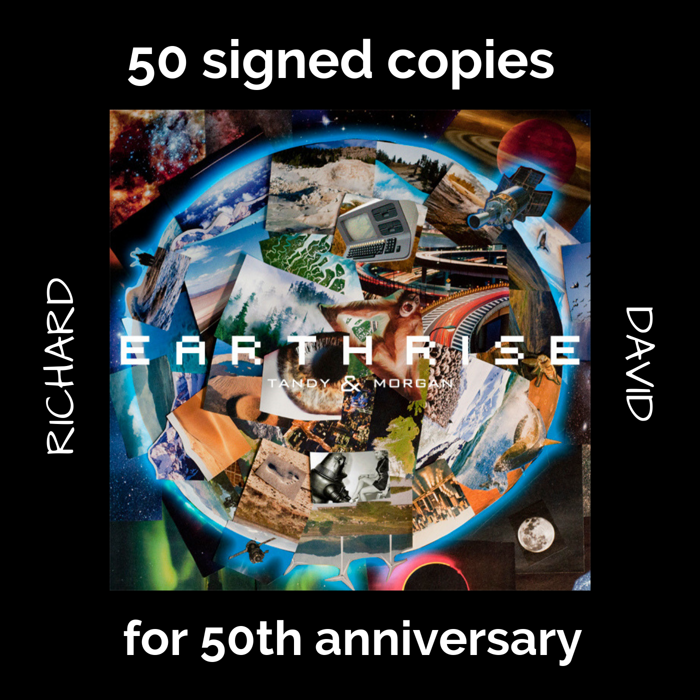 Pay what you want ($30 minimum)
Sold Out

On 24th Dec 2018 it will be 50 years since man saw an earthrise for the first time! Richard and I have signed 50 copies that you can buy as a Christmas present or keep-sake. The money will go towards the *live Earthrise project * on 9th November 2019.

* "It was on Christmas Eve 1968 when the crew of Apollo 8 first orbited the moon and read a portion of Genesis to all of us listening back on Earth. Then they took a photograph of the earth rising above the lunar landscape and somebody coined the word ‘Earthrise’. I first saw it on the front page of LIFE magazine and I thought: ‘Earth-Rise – What a beautiful name. But is that one word or two?’ That was how this music first began fifty years ago. Now in 2018, as we approach the anniversary of ‘Earthrise’, we look around to see that Apollo and Concorde and Shuttle have all come and gone, while mobile phones, social media and airport security have become earth-bound bookends of our new reality. Earthrise belongs to that brief moment when space and planets and galaxies seemed so eminently reachable, that time of unbridled optimism, when NASA was the gold standard of human achievement, the champions of truth and progress. By 1972 the flame had died and the Apollo program ended. That is the vim of Earthrise. The love that we felt for that future is the life blood of this album and this music. It is fantasy, it is romance; a piece of Nostalgia set in tomorrow."* Dave